The two primary speakers, the Rev. Dr. Andrew McGowan and the Rt. Rev. Dr. Ian T. Douglas, at the 2017 Society of Scholar Priests Conference are currently active in the Episcopal Church in Connecticut. They represent two of the active vocations of Scholar Priest: McGowan as the academic priest, and Douglas as the episcopal teacher. Join them, along with the Rev. Dr. Molly F. James, Dean of Formation for the Episcopal Church in Connecticut, the Rev. Canon Dr. C. K. Robertson, Canon to the Presiding Bishop as we explore Teaching as a Pastor and Priest.

Andrew McGowan was appointed Dean of the Berkeley Divinity School in 2014. An Anglican priest and historian, his scholarly work focuses on the life of early Christian communities, and on aspects of contemporary Anglicanism. Professor McGowan’s project of re-describing early eucharistic practice in relation to ancient food and meals is found in Ascetic Eucharists: Food and Drink in Early Christian Ritual Meals (Oxford, 1999) and in subsequent articles and chapters produced in conversation with members of the Meals in the Greco-Roman World group of the Society of Biblical Literature. His most recent book, Ancient Christian Worship (Baker Academic, 2014) seeks to describe discursive and ritual practice in the ancient Church, including use of music and speech as well as sacramental ritual, and to acknowledge the diversity of early Christian belief and practice. He is currently working on how early Christian and other ancient Mediterranean groups used, changed, and created notions of sacrifice.

Before coming to Yale Professor McGowan was Warden of Trinity College at the University of Melbourne, and a Canon of St Paul’s Cathedral, Melbourne. He was an member of the General Synod of the Australian Anglican Church and of its Doctrine Commission, contributing to published conversations on environmental theology, restorative justice, and the theology of worship. 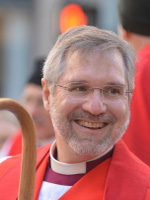 The Rt. Rev. Ian T. Douglas, Ph.D. is the 15th Bishop Diocesan of The Episcopal Church in Connecticut, serving approximately 168 parishes and faith communities in the state of Connecticut. Elected in October 2009, he was ordained bishop in April 2010. From 1989 to 2010 he was a faculty member at the Episcopal Divinity School in Cambridge, Massachusetts where he was the Angus Dun Professor of Mission and World Christianity. Douglas also served as Priest Associate at St. James’s Episcopal Church in Cambridge, Massachusetts from 1989-2010.

A sought-after speaker nationally and internationally, Douglas is the author/editor of four books and numerous academic and popular articles on the topics of mission, the missional Church, contemporary Anglicanism, and world Christianity. Douglas has studied at Middlebury College (B.A.), the Harvard University Graduate School of Education (Ed.M.), and Harvard Divinity School (M.Div.). He holds a Ph.D. in missiology from Boston University.

For his work on the Design Group for the 2008 Lambeth Conference, former Archbishop of Canterbury Rowan Williams awarded Douglas the Cross of St. Augustine, the highest honor in the Anglican Communion. He has received honorary doctorates from the Episcopal Divinity School and Berkeley Divinity School at Yale.

Douglas resides in Essex, Connecticut with his wife, Kristin Harris. They are the parents of three young adults: Luke, Timothy, and Johanna. Ian and Kristin enjoy fitness training and outdoor activities including sailing, kayaking, skiing and walking their dog, Abby.